We love to dance. We aren't dancers. We just dance for the sake of it. We feel at home in motion. What's that song? It's Perpetuum Mobile's last hit. Wait... Are we really dancing? I feel as if something else was dancing me, actually. Ah! The green fields of Europe, the rivers, the mountains... yes, the mountains! The mountain behind the highway, between the power plant and the big resort under a starry blue sky. Stars. My eyes... did I hit my face on the door again? Yes. They shoot horses. Nonsense? Europe. Und? Yeah!


TANZ EUROPE EXPRESS could finally come into reality after some unsuccessful attempts and lots of problems. It was born accidentally while three of us where dancing -or trying to dance- a really weird song in an empty bar. "How do we dance nowadays?" was the question that arose of that funny experience. After some months, the question turned into something even more wide (and imprecise): "But... why, how and when do we dance? Where do we dance in our daily life? Together or alone? What has changed along the years since we were children and learnt what does actually dance mean?".
Some other questions/ideas/problems/issues came later on into the project: the politico-economic situation in Europe ie. the brand new Crisis (how could one ignore it?); Kraftwerk's anthem "Trans Europe Express" and the corresponding idealization of a bright and popular future of the European unity; The technological revolutions of the daily and common life; The ubiquitous urban loneliness; The intergenerational question: our parents and us, so far so close; etc.
Afterall, what remains in the background all the time is the question:
Does NEW always mean BETTER?

Taking a look at our present, we conclude that it is becoming harder and harder to answer just YES.
What are we doing (so) wrong? 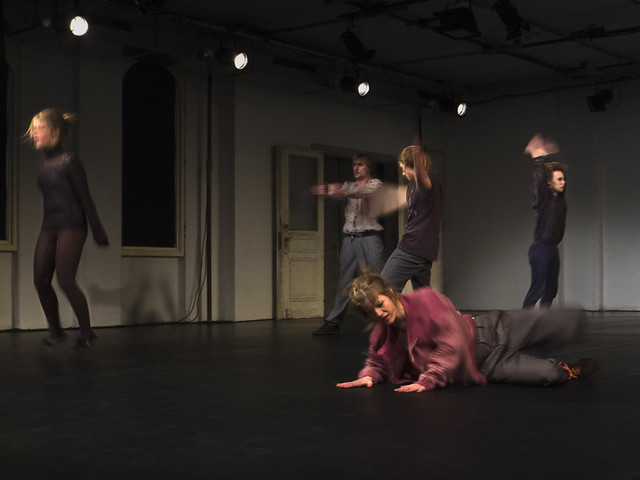